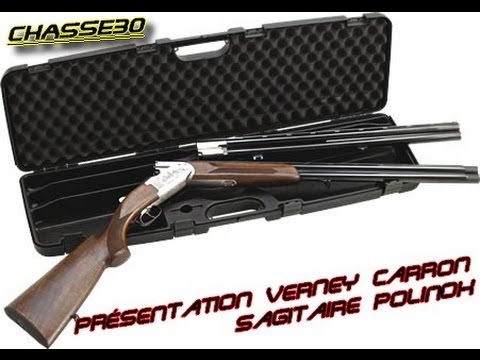 The late 19th Century was known as the “Golden Age” of invention and represented a time of rapid technological advancement in the development of the modern side by side shotgun.   Sadly, most of today’s emphasis on these early makers and their contributions seems to be with the better known British makers.  But there were also creative and innovative gun makers in other parts of the world; places like Liege , Belgium ; Gardone , Italy ; and St. Etienne , France .   And though it is a fact often overlooked, it was, by the way, the creative talents of French gun makers who are credited with the development of the first side by side double guns.  One of these creative French gun makers was the firm of Manufacture d' Armes de Saint Etienne, a state owned arms manufacturer with a gun making history going all the way back to the 16th century.  In 1911 the company name was shortened to simply "Manufrance".

This study begins with the year 1887 when the firm Manufrance commenced production of a unique round action box lock known as the IDEAL.  Its round frame profile seemed a perfect choice, and was nothing new at the time.  Round frame guns had been the standard for years, as this was the traditional profile given to the earliest back action hammer guns.  As acceptance of new innovation is often a slow process, a round frame gun may have, in fact, been more appealing to those shooters who might not have adjusted to the “squared” shape of the new-fangled self cocking hammerless guns.  The exact thinking at the time may never be known; but it is said that, although look may be a matter of taste, feel remains a matter of experience.  The simple fact is that a round frame gun naturally fits the contour of the hand; and is therefore comfortable to carry and provides a secure grip when called into action.

Some might say the IDEAL is just a French version of the round action Dickson or MacNaughton.  In actuality, it is a completely different design utilizing a vertical bolting mechanism and an under lever that opens the gun and cocks the hammers.  This unique design was developed in 1881, slightly later than the MacNaughton round action, patented in 1879; or the Dickson, which received patent protection in 1880.  A little known fact is that the IDEAL did not receive letters of patent until 1889, eight years after its invention and two years after it had been placed into production; but although the patent award process may have been excessively slow, it was not at all unusual in this era for a new product to be placed into production in advance of official patent protection.

The barrels came in different grades of Damascus or steel, stamped for the last one "ACIER HERCULE" followed by one to five pair of branches or palm determining the quality. If the Damascus were assembled with copper, the new steel was assembled with tin to keep lower temperature. Chopper lump, the technique used to assemble the locking lugs (dovetailed), are an integral part of the barrels. Chopper lump construction is believed to be stronger. The two lugs appear under the action and the model is stamped on the rear one. Here a "No 3R". The lowest grade is No 0. In 1187 were offered models 0 to 8. The letter R means that the barrels are compatible with smokeless powder and appeared in 1897. No 3R appeared in 1898. The barrels are stamped PS with a crown, a Saint-Etienne standard smokeless proof starting in 1901. There is on the barrels flat some indication of loading at proof and at regular use. Those barrels should have been proofed at 12,090 psi. The caliber available went from gauge 8,10,12,14,16,20,24,12mm and express caliber 500,450.375.303 british,405WCF,german 8x57, 600 Winchester and of course the 8 mm Label. The gun we have here is a 12 gauge chambered in 65 mm (very closed to 2 and half inch. Longer chambers, a 70 mm, were only available on a pigeon gun named "Perfection". It is a hercule steel 2 palms bored at 18.4 mm, 65 cm or 2 1/2 half inches. The rib is hollow, a typical feature of the Hexagone, they call it "canon plume" or feather barrel, and it weight XXXX.

This one has a kind of doll head. On earlier models the rib had been raised then flat.

Height triggerguard-top of the fences 51 mm

Similar PS proof mark on the table and "EPROUVE FINI POUDRE PYROXILEE" meaning than the gun went to the proof house assembled for smokeless powder.

On this model, the fences are deeply chiseled as many French guns, and they are doted of loading indicator. Between the firing pin holes is stamped the serial number, 21934, year 1903. The average annual production those was 1500 to 2000 Ideal models. The top tang with a heart shape and to screws side by side will not stay unnoticed.

There is a bolt with vertical ascendant movement to lock the doll head on this model and a Purdey type bolt on the two lugs. The movement of the bolt being of 9mm (.38 inch), the front lug wide of 10mm and the second of 9mm are giving a good surface for a solid looking system. The cocking mechanic, hammers and locking system are in the receiver. The hammers with coiled springs have a sliding horizontal movement, parallel to the barrel. The coil springs are the same one used on the military Lebel, since the manufacture was involved in this production it was probably a warranty of quality for the public. The opening under lever is at the rear of the triggerguard. Squeezing with the index or medium finger will compress the hammer spring and open the action. So while opening, the fire pin will retract before the barrel is moved avoiding friction between fire pin and primers. Interesting too, the hammers can be released slowly by pulling the trigger while the opening lever is up in open position then releasing down the lever. No snap caps are necessary.

When releasing a loaded gun, the gun is on safety position and can be cocked in a fraction of a second by squeezing the lever with the medium finger while the first is already on the trigger. This is why the first models came out without any safety. When the gun was doted of a safety button, this one went through the triggers on each side; fitting left as right handed shooters with a perfectly symmetrical action. It was an ideal solution. But back to more orthodox concept, in 1909 the manufacture gave up this strange "eyeglass-triggerguard" for a more conventional one but kept everything the same regarding the opening lever. What is a good thing! People could have had problems to adapt to this double trigger guard. The use of gloves, on already big fingers, is a definite "no". It is quickly very pleasant to open this round action-under lever and going back to an Anson & Deeley, should have look like at the time, as going back 20 years in time, since it was patented in 1875.

Locked with a quarter of a turn with a nice little lever under the forend, later models doted with extractors will have a more conventional Anson fastening push bottom. So just by taking a look on the forend, it is possible to tell about the extractors or ejectors. At the tip is a piece of Bakelite.

Semi pistol grip with a very thin basket or plaid style checkering said to be Scottish (quadrillage ecossais) was not enough for the engineer of the manufacture. So they doted the stock with an automatic adjustable sling rotative feeder inlayed in the stock. There is only a little metallic part hiding under the stock when not in use. When used, the leather sling is pull and fastened to an open ring under the barrel. At the time, a gun without a sling seems to have been inconceivable!

The gun handles nicely, the balance point is one inch behind the hinge pin, so the barrels are easy to point up.

I have been shooting 2 3/4 inches length shell with loads not exceeding 3 drams-1 oz. A bag of old boxes of cartridges Dynamit Nobel Rottweil 12ga 67.5mm 32g 1 1/0oz were given religiously with the gun. I never figure out what load it was. I kept them as the only cartridge to use in this 65mm chambered gun and I waited for to be out of ammo while shooting clays to use it." Sacrebleu! It really kicked like a mule." That is the inconvenient of a light gun.

The engraving did not escape the English fashion, which became a standard. Although some were engraved with typical floral pattern remembering the art nouveau. I often think than if the Ideal would have been manufacture with a top lever, it would have been more popular. Did it come to late or in the wrong country? It is definitively a good gun which does not look like your neighbor.

Many Ideal are still in the closets, waiting for better days.